Thank you for being interested in contributing to HTTPX. There are many ways you can contribute to the project:

Reporting Bugs or Other Issues

Found something that HTTPX should support? Stumbled upon some unexpected behaviour?

Try to be more descriptive as you can and in case of a bug report, provide as much information as possible like:

You should always try to reduce any examples to the simplest possible case that demonstrates the issue.

Some possibly useful tips for narrowing down potential issues...

To start developing HTTPX create a fork of the HTTPX repository on GitHub.

Then clone your fork with the following command replacing YOUR-USERNAME with your GitHub username:

You can now install the project and its dependencies using:

We use custom shell scripts to automate testing, linting, and documentation building workflow.

To run the tests, use:

The test suite spawns testing servers on ports 8000 and 8001. Make sure these are not in use, so the tests can run properly.

Any additional arguments will be passed to pytest. See the pytest documentation for more information.

For example, to run a single test script:

To run the code auto-formatting:

Lastly, to run code checks separately (they are also run as part of scripts/test), run:

Documentation pages are located under the docs/ folder.

To run the documentation site locally (useful for previewing changes), use:

Here are some common ways the test suite can fail:

This job failing means there is either a code formatting issue or type-annotation issue. You can look at the job output to figure out why it's failed or within a shell run:

It may be worth it to run $ scripts/lint to attempt auto-formatting the code and if that job succeeds commit the changes.

This job failing means the documentation failed to build. This can happen for a variety of reasons like invalid markdown or missing configuration within mkdocs.yml. 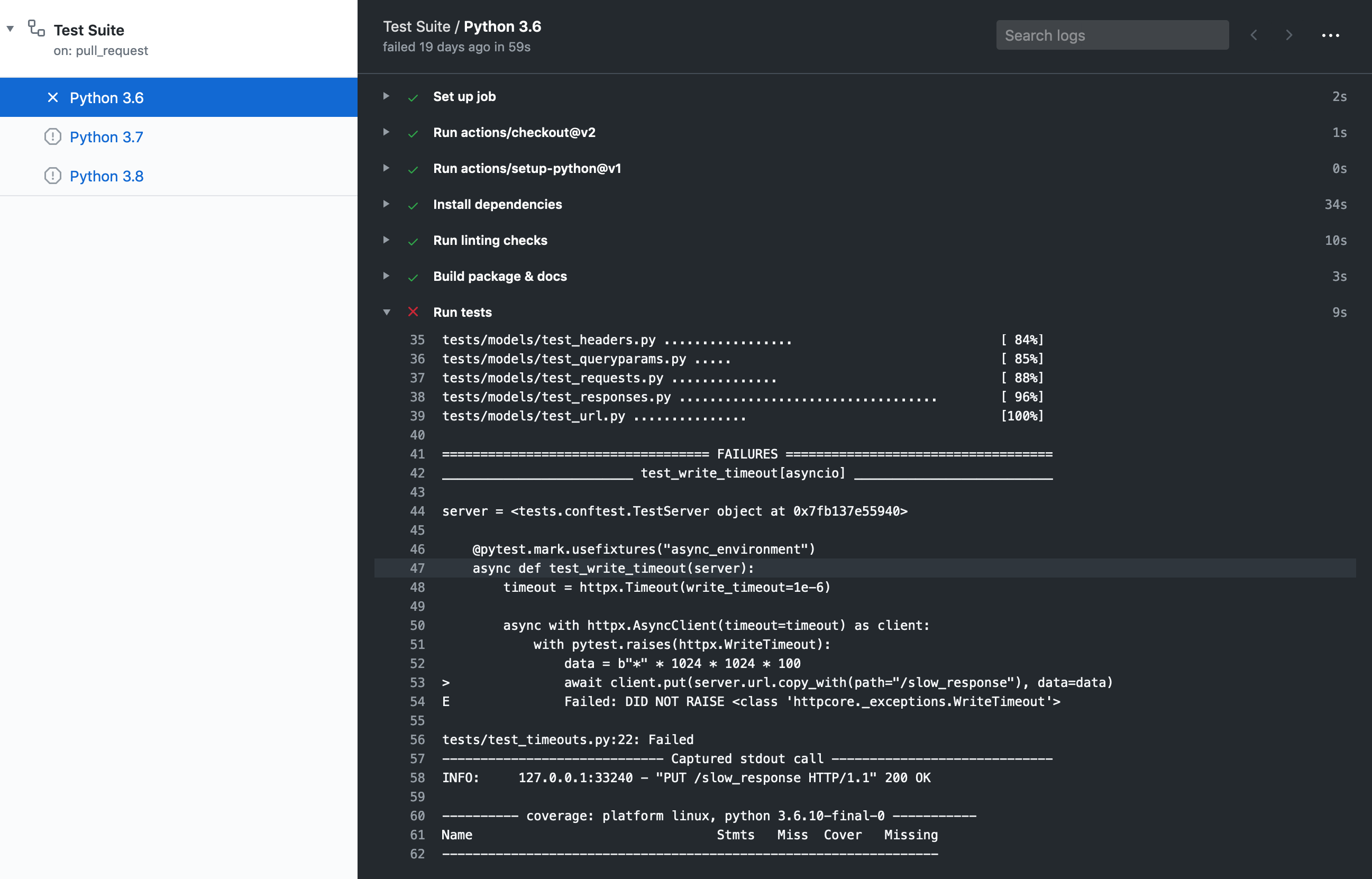 This job failing means the unit tests failed or not all code paths are covered by unit tests.

If tests are failing you will see this message under the coverage report:

If tests succeed but coverage doesn't reach our current threshold, you will see this message under the coverage report:

This section is targeted at HTTPX maintainers.

Before releasing a new version, create a pull request that includes:

Once the release PR is merged, create a new release including:

Once created this release will be automatically uploaded to PyPI.

If something goes wrong with the PyPI job the release can be published using the scripts/publish script.

To test and debug requests via a proxy it's best to run a proxy server locally. Any server should do but HTTPCore's test suite uses mitmproxy which is written in Python, it's fully featured and has excellent UI and tools for introspection of requests.

mitmproxy does require setting up local TLS certificates for HTTPS requests, as its main purpose is to allow developers to inspect requests that pass through it. We can set them up follows:

At this point the server is ready to start serving requests, you'll need to configure HTTPX as described in the proxy section and the SSL certificates section, this is where our previously generated client.pem comes in:

Note, however, that HTTPS requests will only succeed to the host specified in the SSL/TLS certificate we generated, HTTPS requests to other hosts will raise an error like:

If you want to make requests to more hosts you'll need to regenerate the certificates and include all the hosts you intend to connect to in the seconds step, i.e.